Posted on July 27, 2021 by BWBacon. Tagged: Colorado Companies, For Candidates, Resources for Entrepreneurs, For Clients

Despite more than a decade of funding for DEI programs and public statements noting the desire to build more diverse, inclusive workforces, the tech industry as a whole has had little success in shifting the demographic makeup of their organizations. But why? The slow pace provides ample reason for the industry to look critically at these issues and ask, how can we work together to remove existing barriers to career-building roles in technology?

Founder and CEO of Justice Reskill Aaron Clark is helping companies do just that by creating and delivering a talent pipeline that stands apart from other entry-level developer programs. Clark says racial equity is the foundation behind Justice Reskill, and that their ultimate goal is to create stable, long-term pathways to high-wage careers for their graduating participants.

What is Justice Reskill?

Did you know that over 70 million Americans, approximately a third of the adult workforce, have a criminal record? However, fewer than half of previously incarcerated individuals have full-time employment. Historically speaking, a “lack of long-term, career-level employment reverberates deep into many communities, especially communities of color,” as it can be challenging to support yourself or your family if the post-incarceration opportunities available are slim or mostly minimum wage.

If we take a hard look at why tech companies are not more diverse, there are several issues at play. Overwhelmingly, bias and assumptions made about BIPOC people or people who have been involved in the justice system (justice-involved) take the cake as the biggest barriers in diversifying tech companies of all sizes. With Justice Reskill and the Fair Chance Hiring Network, the goal is to shift the current paradigm about justice-involved individuals by getting people involved in careers that give them the agency to make change on a broader scale and essentially reform the criminal justice system. We sat down with Aaron to learn more about Justice Reskill and how its cohorts will, and already have, impacted the future of Denver tech and communities. 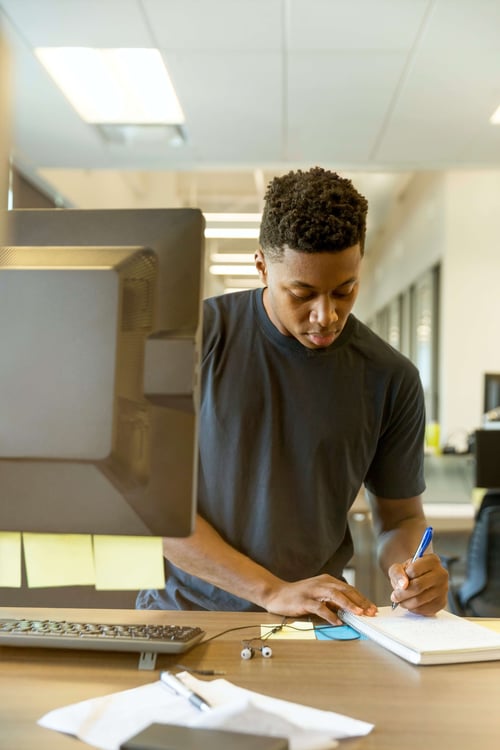 Question: How did Justice Reskill come about, and what phase of development is the project currently in?

Aaron: “We started Justice Reskill about fourteen months ago, so we’re in that startup scale phase. We’ll launch our sixth cohort of students in August, and we’re also launching a new program with the Anti-recidivism Coalition in California to do some work with them there. In general, it's important to note that these injustices don’t just affect justice-involved individuals or their families either. As Americans, we are depriving ourselves of a very capable workforce, made up of those who have already served their time according to the law and who are disenfranchised for no other reason than outdated processes, harmful stigmas, and racist attitudes. The truth is, like anyone else, justice-involved individuals have the potential to thrive and contribute in unimaginable ways. By not allowing or empowering our justice-involved brothers and sisters to contribute, the U.S. economy loses an estimated $78 billion to $87 billion in GDP each year.”

Question: What does it look like to remove barriers to opportunity in the tech space? What do those barriers look like?

Aaron: “If you ask a lot of people who have made their careers very successful in tech, they will tell you that they started playing around with computers when they were 9, 10 years old, and it created a love for programming and technology that they took into their future life, into college, and into their careers. The first barrier is realizing that largely, black and brown folks didn’t have access to these tools and resources as young children.

Especially for folks that are justice-involved, we see data that supports that people who are incarcerated or end up in prison for some reason, they already came from a background of less means, less funding, less resources. So, nine times out of ten, computers are not even on their radar. The assumption that everyone has access to to this material early on in their childhood is the first barrier.

Another barrier is the challenge of learning industry norms, like how to code, if you’re someone who has to survive and work a job to pay their bills on a day-to-day basis. For example, if someone does get into a program, getting hired by a tech company is still hard, for all of us. Many of our bootcamps and programs that teach people how to be involved in tech, even after you finish, it takes you 6-12 months to land your first job because there aren’t a lot of entry level jobs that people are really willing to hire for and train someone on the job.”

Question: So how does the lack of jobs with career training and acceleration impact people trying to enter the tech workforce?

Aaron: “If you are a person that is justice-involved, or black and brown, what happens is you don’t have time to not work. This makes it very difficult to sit for 6-12 months and interview because people need to actually work and get paid for what they’ve done. We see these barriers all over, and the biggest one, bigger than all of those, is bias and discrimination.

People don’t talk about it or speak it out loud, but bias and discrimination is in all of us. When it comes to hiring, hiring managers still discriminate against people that are justice-involved. They still discriminate against black and brown, women, and LGBTQ+ individuals. At Justice Reskill, that is something that we try to help engineering managers see, that bias is in all of us. By acknowledging it, and looking for ways to mitigate that bias when hiring, they can actually see results by hiring people that have a different perspective and bring value to their company and to their engineering teams.”

Question: How do you foresee Justice Reskill enriching Denver business, politics, and culture as it continues to grow?

Aaron: “People in Denver and across Colorado, we pride ourselves in pushing inclusivity, pride ourselves in leading and being good, nice, ethical, and moral, and we speak about that often. In a lot of ways, we have done that and the proof is in the results. But in terms of real inclusion and real diversity, especially in tech, we are actually not succeeding. We don’t have a large number of people who are black and brown or justice-involved working these tech career jobs. We haven’t truly seen equity in who gets to create a voice in our politics, our decisions, and the power that is in our city and our state.

One of the things Justice Reskill is aiming to do is provide that talent pipeline for companies so they do have access to hire people that are justice involved. We want to remove all of the excuses from people that would say directly, or behind closed doors, that there is no talent that is justice involved or that the talent is inferior to other people. Justice Reskill works to help tech companies here in Denver and Colorado really put their money where their mouth is.”

Question: Tell me more about the future focused skills and how your program combines technical and soft skills to help people enter the tech workforce?

Aaron: “As we all know, the tech world changes consistently, so we have to make sure our content and curriculum has a foundation that is solid and current. For instance, there are a few yearly reports that help us understand the skills that go into some of the high value, front-end engineering jobs, and we want to make sure our students have access to that information.

We are always looking at what’s increasing in terms of jobs and conversations in the tech space. Two of those are Artificial Intelligence, or AI, and crypto-currency. These are two spaces that a lot of people are getting involved in, and taking advantage of being early and first to market. While we’re teaching and giving people those core tech skills that they need right now, we’re also consistently saying, how do we expose our students and communities to some of these newer technologies and newer conversations? In the case that it sparks an interest, we can then give them a path on how they can get involved in that particular space.

On the soft skills side, we actually have an entire mantra and philosophy around what we call ‘whole person support.’ There are a number of skills people used to call soft, but we actually call them ‘essential skills.’ We know because of discrimination that happens in terms of hiring and bias for the justice-involved community, we have to make sure our participants are excelling in a number of areas. We do this through training internally, and work with some folks outside the organization as well to provide essential skills training. In this way, we can make sure they are ready to succeed in an interview and then succeed while they are on the job.”

Question: What is the most rewarding part of your work through Justice Reskill?

Aaron: “100% the most rewarding is when a student tells me or I hear a student say that because of the program, it created hope and opportunity for them that wasn’t there before. That in and of itself is everything to me. From time-to-time we’ve had students that will share with us that they didn’t have hope before, and with that they actually do now and so that is exciting to me when I see that.”

Question: Can you help me understand the concept of ‘wealth generation’ and what it has to do with careers in the tech industry?

Aaron: “If you look at the distribution of wealth in America, if you take a typical white family, the average net worth is over $100,000, and if you look at a black person it’s $17,000. There are not a lot of studies that have shown us what wealth generation looks like for a justice involved person, but we do know the poverty and debt that ends up being incurred before, during, and after incarceration.

We know also that without access to capital for yourself and your family, you’re struggling your entire life. That trickles down and creates trauma for children, creates trauma for generations and generations. One of the objectives with Justice Reskill is to try and change that, to help people that are formally or currently incarcerated have access to be able to work and make a living wage.

A lot of the jobs that are offered to people in programs that are justice-involved tend to be minimum wage, or right above. That’s good to be able to get some money and support your family, but it doesn’t give you a path to where your children can do things like go to a good college, or be able to start to enjoy better things in life. We ultimately want to help people get those skills, and start a career where they’re making $65,000 plus, then they’re able to start putting in the foundation for themselves and for their children. By doing that, hopefully we can create wealth for black and brown communities and justice-involved communities across the US. And then the folks that are there, at that level, will be able to make decisions that impact their communities better...