Posted on July 16, 2019 by Dave. Tagged: For Candidates, Colorado Culture, For Clients

Red Rocks Amphitheater is located in the sleepy town of Morrison Colorado just on the cusp of where the Great Plains become the Rocky Mountains. Most days, Morrison has a population of fewer than 800 people, but during show season more than 10,000 audience members and crew flood the town on a nightly basis to experience the ONLY acoustically perfect and naturally formed amphitheater in the world. This geological phenomenon sits at 6450 feet and the park in its entirety is almost 750 acres total. The two sandstone monoliths are taller than Niagra falls and at one point Red Rocks was considered one of the Seven Wonders of the World.

The amphitheater was officially opened on June 15 in 1941 after twelve years of construction, but the history of using the space as a music venue dates back to the early 1900s when the area was known as Garden of Angels. John Brisben Walker, who was best known for taking Cosmopolitan magazine to the masses before selling it to William Randolph Hearst in 1905, would host private concerts at the Garden of Angels from 1906 to 1910. This laid the foundations for the park as a music venue, and the city of Denver was able to purchase the 750-acre park for $54,133 in 1927 (roughly $750K in today's dollars -- what a bargain right?). Plans were completed for the amphitheater in 1936, and construction commenced... It's amazing it all worked out.

My first show at Red Rocks was George Clinton and P-Funk in June of 1996.

Jack Daniels was sponsoring the event and thanks to their spirits I somehow I ended up on stage boogying down during the encore next to the bassist who was literally wearing diapers --Magical -- I will never forget being on that stage and looking up at the rocks, the raging audience gyrating madly, and feeling the intense human/natural energy.

That first experience and so many others helped to cement the opportunity to be a sponsor for Icelantic Ski's Winter On The Rocks (iWOTR).  Traditionally Red Rocks was a summer venue and Icelantic showed the world that it could rock during the winter, and now it's an annual, mind blowing event.

It was such a uniquely Colorado experience that our little agency could play a role in helping our favorite ski company to deliver some world-class artists on the best stage in the world... I mean, look how cool! 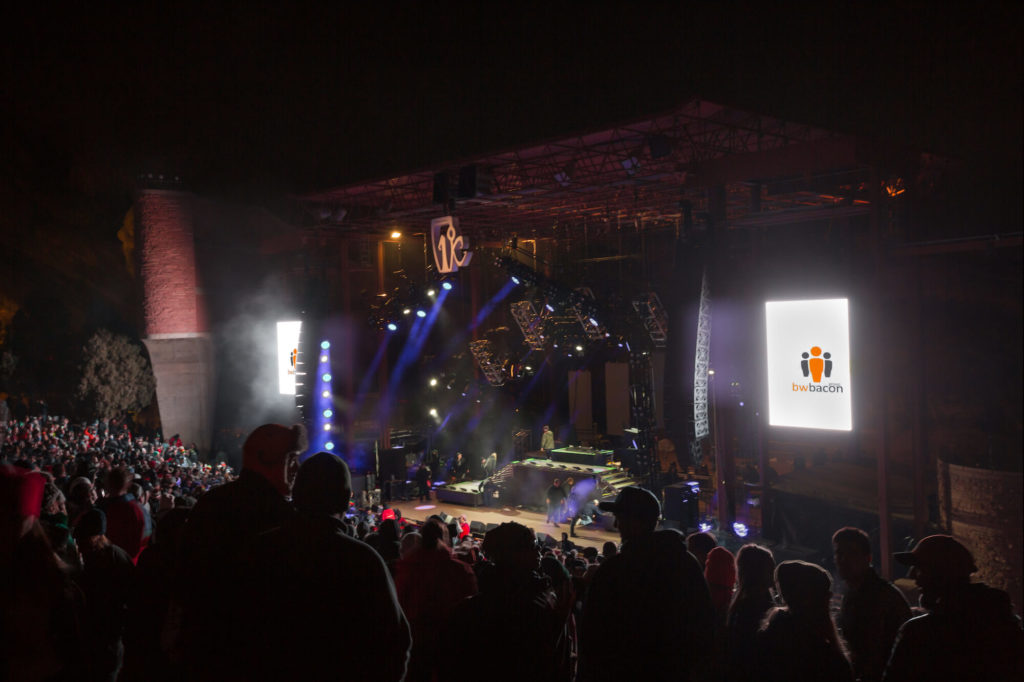 In October of 2015, I was fortunate enough to organize a private concert at Red Rocks. It was to cap a 3-day conference that I co-chaired and MC'd for the Entrepreneurs Organization, and I brought in local acts including The Motet and The Flobots. Once again, with the incredible energy that came from being in this setting was something that I had never felt before and it hit me... It's the same energy I feel in Denver but in a direct, visually iconic, and visceral presentation... Maybe it is the human history of pioneering and battling with the Rocky Mountains or just their presence in our everyday life. But Red Rock's epic scale demands the notion that Denver culture is rooted in all of the natural setting's abundance and vastness.

Red Rocks is our flagship and a right of passage for all Denver new-comers. It is a true Denver icon that I feel is the perfect representation of who we are. It's like our Golden Gate Bridge, our Sydney Opera House... it is a man-made creation that accentuates the natural environment and the impact of is just so lasting, so significant. When you visit Red Rocks, you WILL FEEL the place, its energy, and you can taste Denver's DNA. It is the physical embodiment of Denver culture -- A blend of some of the most impressive nature, wilderness, geological forces with artistic and creative expression.

This is Denver. It is who we are.

Our cultural DNA cannot be separated from the mountains. They are always present to our west and in our hearts. And thanks to Red Rocks, our musical DNA will be a part of the Rocky Mountains for as long as we are allowed to play in them.

It's an infinite loop of culture and mother nature...

...As all things are

I just happen to really love this one and am so grateful that Red Rocks is right in my back yard.