Posted on April 18, 2019 by BWBacon. Tagged: Resources for Entrepreneurs, For Clients

If you are an expert in your field of software development today, the world is your oyster. As you probably already know, many of the best technical candidates receive multiple emails or messages a day offering career opportunities. According to the Bureau of Labor Statistics, the market for software developers from 2016-2026 is projected to grow almost four times faster than the national average. Because of that, we are proposing that hiring managers and company leaders will have to evolve just as rapidly to be successful in team building. What does that mean?

Well, one of the first things that will eventually have to fall to the wayside is the idea of "technology staffing." We understand this initially might feel hypocritical, we do refer to our services as "staffing" often, but our intention of this article is to set a target for the future of technology team building. We want to help raise the bar. Before we get into the weeds, let’s take a look at the differences between staffing and recruiting.

How does BWBacon define staffing versus recruitment?

Staffing: To supply with a staff or with workers

Recruit: Enroll (someone) as a member or worker in an organization or as a supporter of a cause

The big difference we see is around the implication of permission and buy-in from the candidate/employee. The idea of alignment is built directly into the vocabulary. The idea of “supporter of a cause” even goes one step further than “team building.” As compared to the connotations of “supply with workers…”  We say, "No contest!"

We feel this lines up perfectly with an overall theme we are seeing in successful technology team building. We have interviewed dozens of top-performing client companies and tech talent in our network. We are looking to understand what's working in team building here in Colorado. We are finding that the core challenge and a precursor to success is how well your hiring process defines and aligns the four following items:

*Disclaimer - We are putting aside the nuts and bolts elements of team building (timing, headcount, availability, salary, etc.) for the purpose of this post and looking strictly at the philosophical approach to building the strongest team for your company. 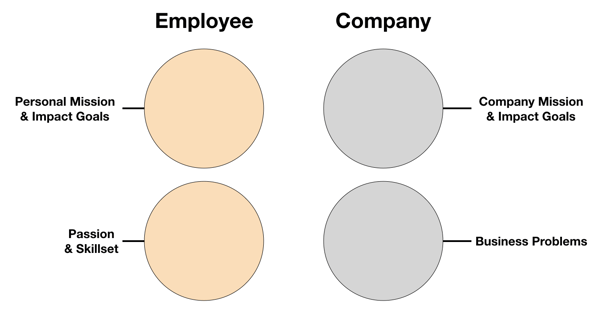 The end goal is to find the largest area of the center intersection of these four elements, like this:

The challenge of team building in technology is far too complicated to approach as just the "supplying of workers." Aligning these four elements demands a holistic approach. The term "staffing" just does not have the legs to meet the parameters of this challenge.

Why does it matter to take a recruiting approach versus a technology staffing approach?

1) “There’s an app for that…” -- More competition and consolidation in the technology market will continue to force companies to focus on team efficacy. Take a look at this infographic to know whether or not your startup idea is already taken...

3) This is bigger than just your company, it’s estimated that an optimized technology eco-system in the United States could add over $3 Trillion dollars to our GDP over the next decade.

Yes, you could argue, “Staffing and recruiting are the same thing…” But we are saying that only depends on how you approach the definition of each and how we want our future to unfold. If you look at how much more vast the core of recruiting can be, you can see it aligns much better with the future needs of technology companies and their team building goals. A little shift in this mindset could mean a big change in our technology ecosystem as a whole.

The irony here is not lost on us. Many times we still are forced to refer to ourselves as a technology staffing agency, but we strive to embody the core values of recruiting in our delivery of service and future of BWBacon Group.